The club attended the Fire and Wood summer event in May at our local Dean Heritage Centre and one of our members got talking to the Director of a local brewery. The brewery thought it would be a good idea if the woodturning club could make some beer pump handles. Paul Williamson, the Director of Hillside Brewery thought that the standard pump handles were boring and bland, and that wood was likely to produce a handle more in keeping with their artisan type beers.

This was introduced as a project at our next monthly meeting and several members took up the challenge.

A brewery visit was organised to confirm dimensions and any other requirements, and the challenge was made even more interesting by the brewery promising prizes of local ales for the best handles.

Having got the full specifications, handles were produced to individual members designs in many workshops across the Forest of Dean, and a date arranged for us to visit the brewery for a combined social evening and competition judging.

It must be said in fairness, that as expected, the attraction of a free Brewery tour and free bottles of local ale had little appeal to the members, but despite this, back up drivers were recruited to ensure everyone stayed safe and were driven home within the law! 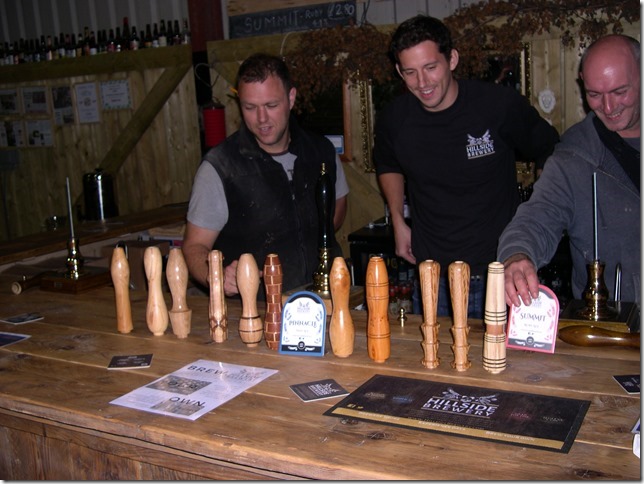 A number of our members attended the event at the brewery with a total of eleven handles were entered in the competition. The brewery team were suitably impressed with our efforts, and appeared to have some difficulty in selecting what they thought were the top three. They eventually selected their favourites (shown in the picture, 1st on the left, then 2nd and 3rd). Prizes of a case of 12 half litre bottles of beer were awarded for each of these handles, and every other handle won 6 bottles. The brewery now have all the handles and will use them in their own bar and supply them to their customers bars to support their local ales. First prize was taken by John Birkett who accepted the case of beer graciously. 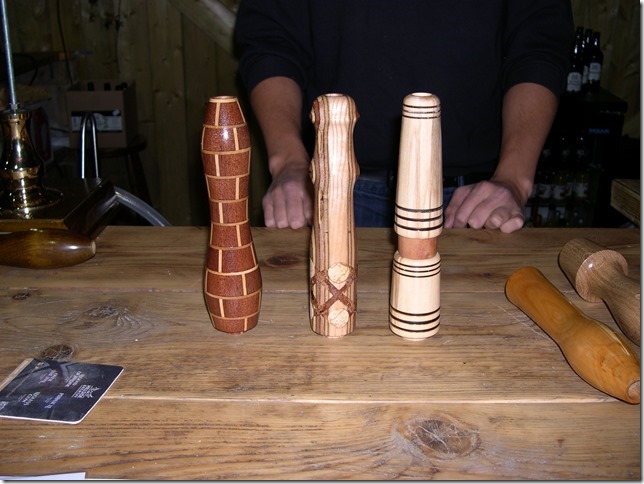 The judging was followed by a tour around the brewery, which was most interesting, and the evening culminated with  a free beer for all attendees.

This was an interesting challenge for those involved, especially challenging was holding the handle on the lathe to finish it off. One member John Birkett used a Doughnut Chuck made from a design in Doc Green’s excellent book “Fixtures and Chucks for Woodturning” and this proved most effective in allowing free access to the handle ends.. 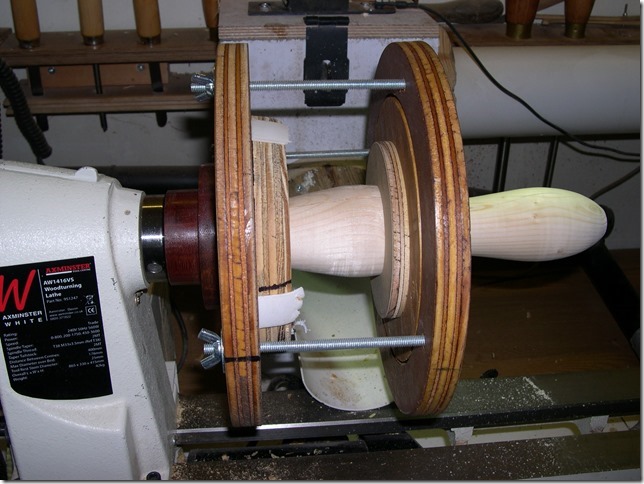 Who would have thought that woodturning and beer drinking are so closely related? Cheers!